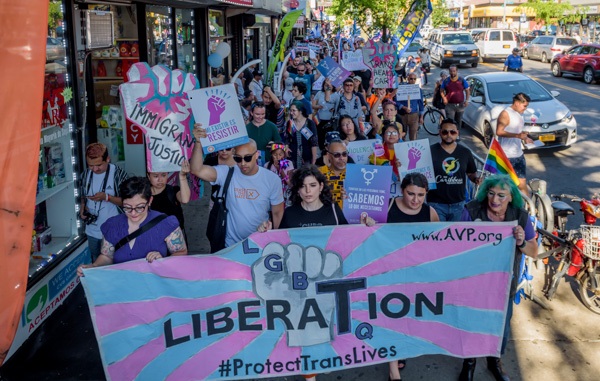 New York, NY, January 16, 2019 — Today at AVP we are celebrating the historic passage of GENDA – the Gender Expression Non-Discrimination Act in New York, which adds protections based on gender identity and expression to the state’s human rights laws and the state ban of abusive conversion therapy. GENDA has been seventeen years in the making, since the legislature passed the Sexual Orientation Non-Discrimination Act (SONDA) in 2002 which did not include protections based on gender identity and expression. We are especially proud that the LGBTQ community has united to ensure that transgender and gender nonconforming (TGNC) people across the state will finally have these long overdue rights and protections. Both laws are important steps toward making LGBTQ New Yorkers safer and fully respected.

This victory marks the first LGBTQ specific legislation passed by the New York legislature since it enacted marriage equality in 2011 and comes at a time when the current federal administration continues to rollback protections for the LGBTQ community and has specifically targeted TGNC people.

We are grateful to the State Assembly leadership who pushed this bill, Representative Dick Gottfried, the Assembly bill sponsor who has consistently been standing up for TGNC people and Senator Brad Hoylman, a strong advocate in the Senate and the bills sponsor who was able to bring it over the finish line. We also recognize that we would not be here today without the visionary leadership and dedication of Senator Tom Duane, AVP’s former board member, who introduced the original GENDA bill years ago. And of course, this milestone belongs to the tireless efforts of TGNC organizers, who refused to accept less than full protections, sharing community experiences of discrimination and lobbying for this legislation.

While we celebrate the passage of GENDA, AVP has concerns that the law also includes increased penalties for people convicted of committing hate crimes against TGNC people, consistent with consequences for all other hate crimes in the state. AVP initially advocated for this hate crime enhancement. However, through our work, we recognize that the use of enhanced penalties for hate violence disproportionately impacts people of color, does not prevent future acts of hate violence, and  does not make our communities safe. AVP celebrates the passage of GENDA, as well as the conversion therapy ban, and will continue to work towards justice that centers LGBTQ survivors and creates greater safety overall.